Kim Tries to Grow N. Korea by Focus on Factories

And he has shown little patience for those businesses who come up short. 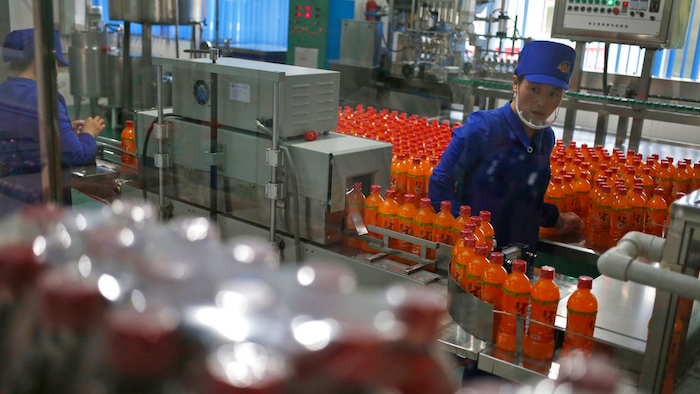 In this Oct. 22, 2018, photo, a worker monitors the production of bottled beverage at Songdowon General Foodstuffs Factory in Wonsan, North Korea. Though the international spotlight has been on his denuclearization talks with Washington, the North Korean leader has a lot riding domestically on his promises to boost the country's economy and standard of living. His announcement in April that North Korea had sufficiently developed its nuclear weapons and would now focus on building its economy marked a sharp turn in official policy and set the stage for his rapid-fire meetings with the leaders of China, South Korea and the United States.
AP Photo/Dita Alangkara

WONSAN, North Korea (AP) — For North Korean factory managers, a visit by leader Kim Jong Un is the highest of honors and quite possibly the most stressful event imaginable.

The chief engineer at the Songdowon General Foodstuffs Factory had looked forward to the visit for nearly a decade. His factory churns out tons of cookies, crackers, candies and bakery goods, plus dozens of varieties of soft drinks sold around the country. In its showroom, Kwon Yong Chol proudly showed off one of his best-sellers, a nutrient soup made with spirulina, a blue-green microalgae "superfood."

"Ever since construction began everyone here had wanted the leader to visit, and this year he did. His visit was the biggest thing that could happen to us," Kwon, smiling broadly, said of Kim Jong Un's visit in July. "He ate our instant noodles. He said they were delicious."

Not all managers have been so fortunate.

There's a lot on the line for North Korea these days. And Kim means business.

Though the international spotlight has been on his denuclearization talks with Washington, the North Korean leader has a lot riding domestically on his promises to boost the country's economy and standard of living. His announcement in April that North Korea had sufficiently developed its nuclear weapons and would now focus on building its economy marked a sharp turn in official policy, setting the stage for his rapid-fire meetings with the leaders of China, South Korea and the United States.

After the announcement of the "new strategic line" and his first round of summits, including his meeting in June with President Donald Trump, Kim embarked on nearly 20 inspection tours around the country in July and another 10 in August, all but one of them to non-military locations. The military inspection rounds are instead being handled by the country's premier, Pak Pong Ju, who has gone on 18 inspection tours from July, mostly to military facilities.

They date to the late 1940s, when Kim Il Sung began gradually institutionalizing the visits to demonstrate his hands-on leadership and, as invariably portrayed by the North's media, his deep care and concern for the well-being of the people.

Factories, farms and important industrial facilities are the usual destinations. But Kim Jong Un's focus on them this year marks a break from excursions in 2017 to nuclear weapons facilities and missile sites.

Reflecting the gravity of his current mission, Kim has shown little patience for cadres who come up short.

On his July tour in the northern part of the country he lambasted officials at a factory that produces backpacks for students, saying their attitude was "very wrong" and "has no revolutionary spirit." He then dressed down officials at a power plant that has been under construction for 17 years, criticized people in charge of a hotel project for taking too long to finish plastering its walls and slammed the authorities responsible for building a recreational campsite.

"Looking round the bathroom of the camp, he pointed out its very bad condition, saying bathtubs for hot spring therapy are dirty, gloomy and unsanitary for their poor management," said an official report of the visit.

Most inspection tours, however, go like Kim's two-hour visit to the Songdowon processed foods factory.

With a gaggle of cameramen in tow — the tours are always top news in North Korea's media — the site's senior manager generally serves as the guide. Members of Kim's entourage frantically take notes as he suggests tweaks of this or that and offers praise or encouragement.

Many factories put up red and gold plaques to commemorate the event. Some have special wall displays made afterward that show the exact path the leader took in little LED lights that can be turned on at the press of a button.

At Kwon's factory, which has 300 employees and is located on the outskirts of the eastern coastal city of Wonsan, Kim advised managers to improve operations on an "automated, unmanned and germ-free basis, holding aloft the banner of self-reliance."

Before the obligatory group photo session, the North's official news agency reported, Kim voiced "his expectation and conviction" the factory would produce more quality foods "and thus more fully demonstrate the honor of being a factory loved by the people."

But Kim also had a broader point to make.

He told the factory management that they must be prepared to work in a more competitive environment, to modernize and cut the fat. These are special times and they, and basically all managers throughout the country, need to step up their game.

"The Respected Marshal Kim Jong Un pays much more attention to the quality of a product," Kwon said. "When he came to this factory he gave instructions to maintain a high level of hygiene because food is closely associated with the health of the people, and to keep the highest level of quality of products that people like. He said we must produce products that are world class, and produce a lot of foods that people like."

Kwon said the pressure isn't just coming from above.

"The people demand more quality," he said. "When people look at the product, they must feel like they want to have it. So we are designing things in line with that. We have to satisfy the demands of the people."

Are Your Clothes Made in N. Korea?