The company contends that it inherited rights to forest water dating back more than a century. 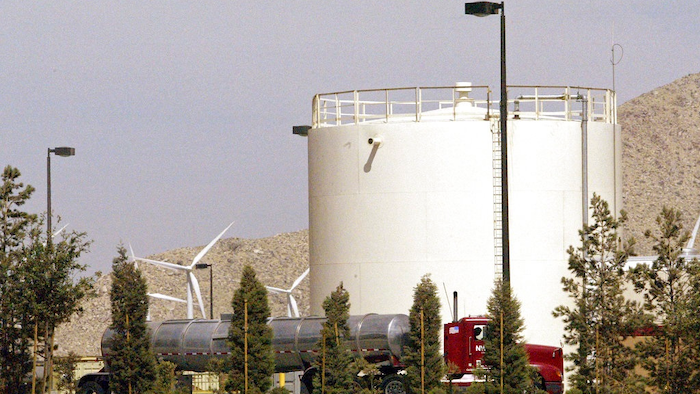 In this July, 7, 2004, file photo, a storage tank is seen at the Arrowhead Mountain Water Company bottling plant, owned by Swiss conglomerate Nestle, on the Morongo Indian Reservation near Cabazon, Calif. Nestle has been offered a three-year permit to keep taking millions of gallons of water from Southern California's San Bernardino National Forest, but with new restrictions designed to keep a creek flowing for other uses. The offer announced Wednesday, June 27, 2018, by the U.S. Forest Service allows the maker of Arrowhead bottled water to continue piping water from the Strawberry Creek watershed as it has done for decades.
AP Photo/Damian Dovarganes, File

LOS ANGELES (AP) — U.S. officials offered Nestle, the maker of Arrowhead bottled water, a three-year permit on Wednesday to keep taking millions of gallons of water from a national forest in Southern California — but with new restrictions designed to keep a creek flowing for other uses.

The offer announced by the U.S. Forest Service allows Nestle Waters North America, the biggest bottled-water company in the nation, to keep piping water from the Strawberry Creek watershed that it's tapped for decades.

The permit would allow extraction only when water is available to protect natural resources in the San Bernardino National Forest northeast of Los Angeles. Use could be restricted if the state's scattered drought conditions worsen.

The company, a division of the Swiss food giant, took about 32 million gallons of water from wells and water collection tunnels in the forest in 2016. It contends that it inherited rights to forest water dating back more than a century.

Opponents have long sought to turn off Nestle's tap, arguing that the water usage could harm the environment and wildlife, particularly in a state that has struggled with drought.

Environmental and public interest groups sued the Forest Service in 2015, arguing that it was improperly allowing Nestle to take national forest water under a permit that expired in 1988. A court ruled that the company could continue water operations while its application to renew the permit was pending.

The new three-year permit would provide time for the company and forest officials to conduct more studies that could lead to a longer-term decision, the Forest Service said.

The decision ensures "the water withdrawal and conveyance infrastructure is under a current permit, and it provides for protection of forest resources," District Ranger Joe Rechsteiner said in a statement.

The agency said the watershed's health is now rated as "impaired" and that water extraction will be allowed "when there is water available consistent with the forest's Land Management Plan."

Nestle has 60 days to decide whether it will accept the terms.

During its application process, the company provided 70 environmental studies and will "carefully review the specifics of the decision," spokeswoman Alix Dunn said in a statement.

"Californians are passionate about water and so are we. We take our responsibility as a California water steward seriously and Arrowhead's successful operations for more than a century point to our commitment to long-term sustainability," the statement said.

The company collects water using a gravity-fed system of two water tunnels drilled deep into the mountainside. The water flows downhill through a pipeline to a tank, where it's pumped into trucks and hauled to a bottling plant.