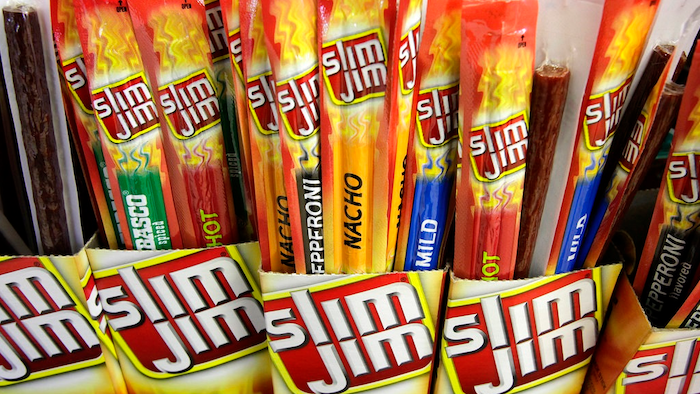 In this March 24, 2010, file photo, Slim Jim beef sticks stand on a shelf at a Shell gas station mini-mart in Bainbridge Twp., Ohio. Conagra, which has brands such as Slim Jim and Reddi-wip, is buying Pinnacle Foods Inc. in a cash-and-stock deal valued at about $10.9 billion that will help the food company expand in the frozen food and snacks categories.
AP Photo/Amy Sancetta, File

CHICAGO (AP) — Conagra is buying Pinnacle Foods Inc. in a cash-and-stock deal valued at about $10.9 billion that will help the food company expand in the frozen food and snacks categories.

The deal marks the latest shift in the reconfiguration of the U.S. food industry as many families are seeking foods they consider healthier and less processed. As major food makers face more competition from smaller companies and struggle to increase sales, they've come under pressure from investors to boost profits through cost cuts, mergers and acquisitions.

Meanwhile, companies such as Coca-Cola, Kellogg and PepsiCo have vowed to slash costs. Others have made deals to break up or combine operations. The split of Kraft Foods in 2012, for instance, created Mondelez International, which took more promising global snack brands such as Oreo and Ritz.

Shareholders of Parsippany, New Jersey, based-Pinnacle will receive $43.11 per share in cash and 0.6494 shares of Conagra Brands Inc. stock for each share of Pinnacle held. The transaction also includes Pinnacle's outstanding debt, the companies said Wednesday.

Pinnacle shareholders are expected to own approximately 16 percent of the combined company.

The deal is targeted to close by the end of the year. It still needs approval from Pinnacle shareholders.

Hershey Buying Snack Maker for $1.2B