Pilgrim was known for appearing on Pilgrim's Pride commercials in a pilgrim's hat, and handing out on the Texas Senate floor $10,000 checks with blank payee lines in 1989. 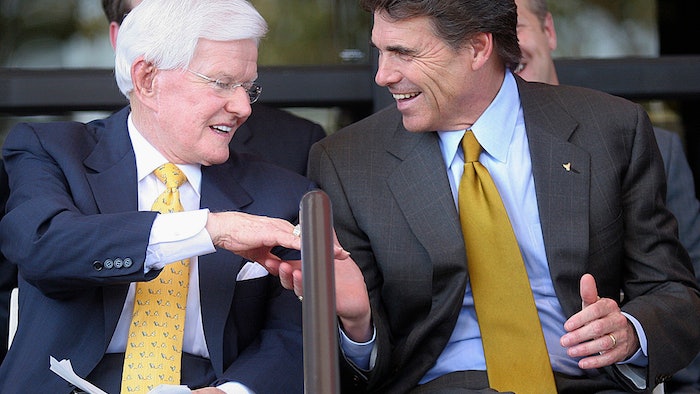 In this Sept. 18, 2005, photo, Lonnie "Bo" Pilgrim, CEO and Chairman of the Board of Board of Pilgrim's Pride Chicken, left, shakes hands with Texas Gov. Rick Perry at the Dedication Open House of the companies new headquarters in Pittsburg, Texas. Pilgrim, who grew a one-time feed store into the world's largest poultry producer before losing the company in bankruptcy, has died at 89. A statement on the Erman Smith Funeral Home website says Pilgrim died Friday, July 21, 2017, at his Pittsburg home.
Herb Nygren/Tyler Morning Telegraph via AP

PITTSBURG, Texas (AP) — Lonnie "Bo" Pilgrim, who grew a one-time feed store into the world's largest poultry producer before losing the company in bankruptcy, has died at 89.

A statement on the Erman Smith Funeral Home website says Pilgrim died Friday at his Pittsburg home, about 110 miles east of Dallas.

Pilgrim was known for appearing on Pilgrim's Pride commercials in a pilgrim's hat, and handing out on the Texas Senate floor $10,000 checks with blank payee lines in 1989. Nine of the 31 state senators accepted the checks.

"The common practice of mine is to give large contributions to people — preachers, educational institutions and politicians — and $10,000 or $100,000 is a common practice with me. It's primarily just for the name identification with the politicians. They will answer your calls and give you an appointment and listen to you describe an issue. It does not infer a bribe," Pilgrim said at the time.

Texas law at the time did not limit campaign contributions, but most of those who accepted the checks later said they had returned them or planned to do so.

Aubrey Pilgrim and a partner bought a Pittsburg feed store in 1946, and Pilgrim asked brother Bo to join the partnership. It established its first poultry-processing plant in 1960 nearby in Mount Pleasant.

Pilgrim became CEO of the company upon the death of his brother in 1966. That began Pilgrim's Pride's expansion, assisted by acquisitions of competitors through the 1990s into the 2000s, eventually becoming the world's biggest poultry producer by 2007.

However, the debt the company took on from the acquisitions began to strangle the company as spiking feed prices and a poultry glut tightened that noose. The company filed for Chapter 11 bankruptcy protection in 2009, Pilgrim was replaced as CEO, plants were closed and thousands of employees were laid off.