About 15 percent of dairy production in the United States is exported with one-third valued at $1.2 billion going to Mexico in the form of milk powder, cheese and whey protein. 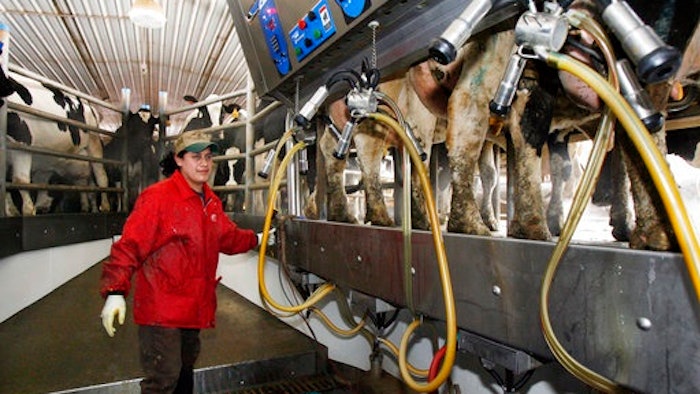 About 15 percent of dairy production in the United States is exported with one-third valued at $1.2 billion going to Mexico in the form of milk powder, cheese and whey protein, according to the National Milk Producers Federation, which says trade with Mexico is its top priority. That's nearly double the value exported to Canada, the country's second biggest export market, according to the United States Department of Agriculture.

"The income of dairy farmers, whether they're in Vermont or California, depends heavily on our export to Mexico," said Jaime Castaneda, senior vice president responsible for domestic and international policy for the federation.

If just 1, 2 or 3 percent of the exports were to come back to the United States, "we would see a significant drop on overall prices," he said.

Far from the U.S.-Mexican border, trade is on the minds of dairy farmers in Vermont.

"Mexico is our biggest destination for dairy and it's not only dairy," said Fairfield farmer Harold Howrigan Jr., of the U.S. trade partnership with Mexico. "It's corn and soy also that go down there so our huge trading partner and we need that market."

Howrigan is the board president of the St. Albans Cooperative Creamery. He made comments after meeting with Democratic U.S. Rep. Peter Welch last week.

U.S. dairy trade with Mexico has jumped by 558 percent since NAFTA's implementation in 1994, according to the U.S. Dairy Export Council.

Anything that happens that reduces the ability to trade products to Mexico will be troubling for dairy producers in the United States, said Scott Brown, a dairy economist with the University of Missouri.

"Can we renegotiate and get a better NAFTA deal? Only time will tell. Those trade agreements traditionally have taken a lot of time and effort to get everybody on the same page and we know we've benefited tremendously on the NAFTA agreement that we have," Brown said.

Mexico has objected to Trump's pledges to step up deportations, build a border wall and renegotiate NAFTA.

The National Milk Producers Federation and U.S. Dairy Export Council traveled to Mexico City in March to meet with Mexican dairy leaders to reinforce its commitment to continue working with that country.

"We see Mexico as a partner, not necessarily as just a customer," Castaneda said.

How NAFTA 2.0 Will Shake Up Business As Usual