The plan is to build a new slaughterhouse with $1.8 million in federal grants and offer reindeer steaks and roasts. 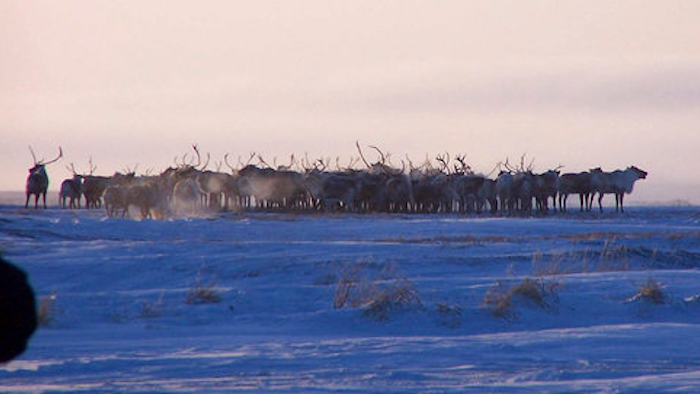 This Dec. 11, 2004 photo provided by Marlene Minnette show reindeer from the herd owned by the Native village of Mekoryuk on Alaska's Nunivak Island. The tribal government is expanding its commercial reindeer subsidiary with $1.8 million in federal grants, with plans to include sales of the meat to larger urban markets.
Marlene Minnette via AP

ANCHORAGE, Alaska (AP) — A remote Eskimo village on a tundra-covered island in western Alaska is hoping to counter its steep unemployment rate and achieve greater self-sufficiency through one of its few resources: reindeer meat.

Mekoryuk's tribal government is expanding its commercial reindeer venture with a herd introduced a century ago to Nunivak Island, 40 miles off the coast in the Bering Sea.

The endeavor includes plans to build a new slaughterhouse with $1.8 million in federal grants and offer reindeer steaks and roasts for sale in urban parts of Alaska such as Anchorage and ultimately the lower 48.

The Cup'ig Eskimo community of 200 had a similar operation in the past, with a regulated slaughterhouse that allowed it to sell reindeer meat to a broad market that included high-end Denver restaurants.

"The idea behind this was to try to re-establish that market and the whole process here," said Dale Smith, the tribe's operations director.

The earlier operation went downhill after the villager who was considered its driving force died in a 1996 helicopter crash while surveying the island's far-ranging reindeer. The slaughterhouse fell into disrepair, eventually forcing locals to do their slaughtering out on the tundra and limiting where the meat could be sold.

Reindeer meat is lean and high in essential fatty acids, and it's considered by some to be superior in taste to its wild migrating cousin, the caribou.

The tribe's reindeer are among several major herds in greater western Alaska, including the Seward Peninsula, a region farther north that's home to an estimated 10,000 animals.

The herd on Nunivak, which is slightly bigger than Rhode Island, is estimated at up to 2,500 animals. It is the largest source of reindeer meat sold commercially in the state, said ecologist Greg Finstad, manager of the University of Alaska Fairbanks reindeer research program.

Construction of the new slaughterhouse is slated to begin by summer in the effort funded by grants from the federal Economic Development Administration. A regional nonprofit, the Coastal Villages Region Fund, is footing some of the cost of four new snowmobiles for herding the animals.

The slaughterhouse is expected to meet rigorous inspection standards, Finstad said. This will allow residents to greatly expand their market, selling to restaurants and sausage companies.

They also will be able to process the meat into steaks, roasts and the like. Currently, field-dressed reindeer meat from Nunivak is sold under certain restrictions to locals as well as some rural grocery stores.

The expansion is expected to bring additional revenue for the tribe's commercial reindeer subsidiary, Nuniwarmiut Reindeer and Seafood Products, while creating as many as 20 seasonal winter jobs for locals.

Like other remote communities, Mekoryuk, the island's only town, has limited jobs opportunities. It had an average unemployment rate of nearly 28 percent between 2011 and 2015, according to the latest data available.

Residents work for the tribal and local governments, the village store, clinic and school, and a handful of other entities. For much of their food, they rely on subsistence activities, such as harvesting reindeer, hunting seals and fishing for salmon.

For a time, there was a small halibut processing plant operated by the Coastal Villages Region Fund, but it shut down a few years ago after proving unprofitable, leaving reindeer as the community's main economic driver.

That was a good reason to invest in Mekoryuk, said Shirley Kelly, an official with the federal economic development agency in Anchorage.

"It's going to help them build economic resiliency," she said.

Alaska Commercial Co., which has stores in nearly three dozen remote communities in the state, carries Nunivak's reindeer meat at 20 of its northernmost stores, including in the commercial hub town of Bethel, 150 miles east of Mekoryuk. The reindeer carcasses are sent in halves to Anchorage, where they are processed into cuts and packaged by AC workers, AC general manager Walter Pickett said.

"Right now, our demand exceeds the supply," he said, adding the chain would like to buy more reindeer as the supply increases.

Finstad said he applauds the village's efforts to become less reliant on government.

"Their natural resource is the vegetation on their island, and they're developing it into a product they can market — reindeer meat," Finstad said.