The deal is the eighth largest environmental settlement in the nation but, under the terms, DuPont will admit no fault. 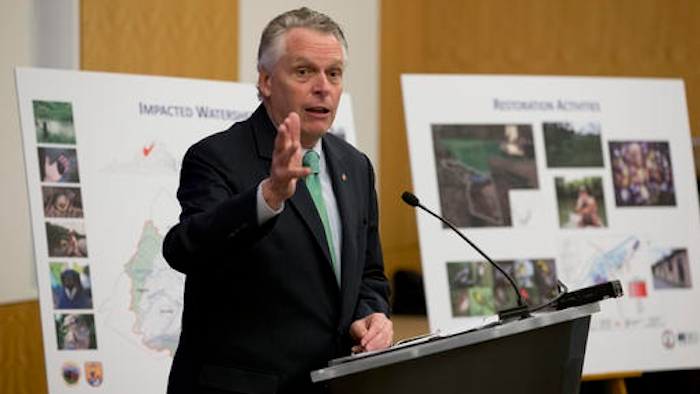 RICHMOND, Va. (AP) — Chemical giant DuPont will pay more than $50 million but admit no fault under a proposed environmental settlement after releasing toxic mercury for decades that made its way into Shenandoah Valley waterways, state and federal officials announced Thursday.

The deal would resolve alleged violations of civil environmental statutes, including the Clean Water Act, related to the pollution from a company factory in Waynesboro. It would amount to the largest environmental damage settlement in Virginia history and the eighth largest in the nation, officials said. The money would go to projects including wildlife habitat restoration, water quality enhancement and improvements to recreational areas.

"In bringing this settlement to a close, we are finally righting a wrong that has impacted the South River and the South Fork of the Shenandoah River for so many decades," Democratic Gov. Terry McAuliffe said at a news conference announcing the settlement.

Wilmington, Delaware-based Dupont Co. used mercury in its process of making synthetic fiber at the plant between 1929 and 1950, according to the state Department of Environmental Quality. Strict storage and disposal regulations weren't in place at the time, and some of the mercury seeped into the South River and flowed downstream to the South Fork of the Shenandoah River.

DuPont discovered the mercury — which accumulates in fish and is especially dangerous to pregnant or breastfeeding women and young children — in the facility's soil in 1976, officials say.

The pollution impacted over 100 miles of river and thousands of acres of floodplain and riparian habitat, affecting fish, mussels, migratory birds and amphibians, the Department of Justice said in a statement. The pollution also has limited some recreational fishing in Waynesboro, a city of about 20,000 in the Shenandoah Valley.

The terms of the settlement are outlined in a proposed consent decree that was filed in federal court in Harrisonburg on Thursday. It is subject to a 45-day public comment period and must be approved by the court.

The amount of money proposed is "quite impressive," but mercury is very persistent in the environment and very difficult to remove, said Dr. Thomas Benzing, a professor of integrated science and technology at James Madison University who works with a team of researchers who have been monitoring the mercury levels since 2001.

The company also will pay for renovations at the Front Royal Fish Hatchery to improve production of warm-water fish such as smallmouth bass, at an estimated cost of up to $10 million.

"Every dollar is going to be used to clean up the land, the source issues and the water, to where it would have been" if not for the pollution, said Assistant Attorney General John Cruden of the Justice Department's Environmental and Natural Resources Division.

No one from DuPont — which is awaiting final regulatory approval for its merger with Dow Chemical in a deal to create DowDuPont, a $130 billion conglomerate — spoke at the announcement.

But Mike Liberati, South River project director for the DuPont Corporate Remediation Group, said in a statement that DuPont "is committed to a long-term presence in the Waynesboro area and to maintaining transparency with its citizens."

The first phase of remediation, involving part of the riverbank in Waynesboro's Constitution Park could be complete in February. Soil there containing the highest concentrations of mercury is being excavated and hauled away and replaced by clean topsoil, Liberati said.

"It's going to be a long-term project. It's not something that's going to happen overnight," Benzing said.