The livelihoods of more than 200,000 people were harmed when toxic pollution caused 115 tons of fish to wash ashore in April. 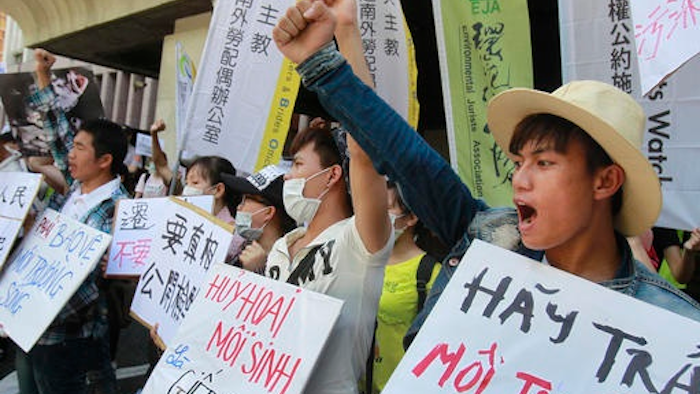 Vietnamese activists shout slogans and hold placards reading ''Destroying the environment is killing, "left, and ''Return clean seawater to us'' during a protest to urge Formosa Plastics Group to take responsibilities for the cleanup in Vietnam, in Taipei, Taiwan.
AP Photo/Chiang Ying-ying, File

The factory, owned by the Formosa Plastics Group, acknowledged in June that it was responsible for the pollution that killed large numbers of fish off the central Vietnamese coast in April, and pledged to pay $500 million to clean it up and compensate affected people. The pollution created the country's worst environmental disaster, devastating the regional fishing and tourism industries, and sparked rare protests in the Communist country.

Catholic priest Dang Huu Nam, who led the group of local fishermen, said 506 petitions have been submitted to a local court in Ky Anh town in central Ha Tinh province where the massive fish kill occurred.

"Based on the fact that Formosa admitted their mistake, based on the Vietnamese laws and the losses suffered by the fishermen, they have submitted their claims and they demand that Formosa be closed and compensate their losses as well as material and health losses they may suffer in the future," Nam said Tuesday by telephone from the courthouse.

The priest said many more fishermen are completing their files and he expects more than 100,000 fishermen to file petitions.

He said the fishermen on Monday travelled 200 kilometers in 15 buses to the People's Court in Ky Anh town which received 199 petitions on Monday and another 307 claims on Tuesday.

Some 5,000 people around Ky Anh town on Monday gathered outside the courthouse to show their support, he said.

Nam said the court now will decide to process their claims or reject them or refer their cases to a higher relevant authority.

Under Vietnamese law, the claims must be filed individually.

Lawyer Tran Vu Hai said the fishermen's actions to file their claims may not lead to their cases being brought to trial, but could open a way for Formosa and the fishermen to "talk directly with each other" for a negotiated deal.

An estimated 115 tons of fish washed ashore along more than 200 kilometers (125 miles) of the central coast in April, the government said in a report to the National Assembly in July. The disaster harmed the livelihoods of more than 200,000 people, including 41,000 fishermen.

Formosa Plastics's $10.6 billion steel complex in Ha Tinh province includes a steel plant, a power plant and a deep sea port, and is one of the largest foreign investments in Vietnam.