The maker of Cheerios and Yoplait said it is impractical to label its products for just one state. 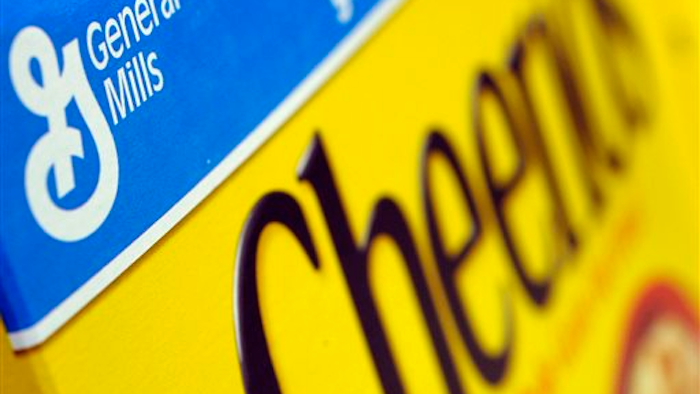 General Mills says it will start labeling products across the country that contain genetically modified ingredients to comply with a law that is set to go into effect in Vermont. The maker of Cheerios cereal, Progresso soups and Yoplait yogurt notes it is impractical to label its products for just one state, so the disclosures required by Vermont starting in July 2016 will be on its products throughout the U.S.
AP Photo/Lisa Poole, file

General Mills said Friday it will start labeling products across the country that contain genetically modified ingredients to comply with a law set to go into effect in Vermont.

The maker of Cheerios and Yoplait said it is impractical to label its products for just one state. And with no deal yet for national legislation on GMO labeling, the company said it decided to add the disclosures required by Vermont starting in July to products throughout the U.S.

A spokesman for General Mills, Mike Siemienas, said the labeling will appear on products over the next several weeks.

The move comes as federal legislation regarding the labeling of genetically modified organisms, or GMOs, has stalled in Congress. The food industry has pushed to make labeling for GMOs voluntary, and sought to prohibit states from enacting a patchwork of laws around the country.

The Grocery Manufacturers Association, which represents the nation's largest food companies, said in a statement that the decision by General Mills underscored the need for a national law.

"One small state's law is setting labeling standards for consumers across the country," the association said.

In January, Campbell Soup Co. broke rank with the industry and said it supported federal legislation for mandatory labeling, and that it would start disclosing the presence of GMOs in its products if a national standard wasn't established in a "reasonable amount of time."

The disclosures by Campbell and General Mills may be easy to miss, unless people are looking for them.

An image provided by Campbell to illustrate compliance with the Vermont law showed a can of Spaghetti-Os with the words "Partially produced with genetic engineering" in tiny print at the bottom of the back of the can.

General Mills did not say that it supported mandatory labeling. But in addition to the coming disclosures, the Minneapolis-based company said people could search its website at ask.generalmills.com to see which products have GMOs.

The Food and Drug Administration has said the genetically modified ingredients on the market now are safe. But advocates for labeling say the issue needs additional study, and that people have the right to know whether the products they buy contain the ingredients.

Among supporters of labeling are many organic companies; products cannot contain GMOs to qualify as organic.

Are More GMOs on the Way?

Are More GMOs on the Way?