Germany's grape harvest is officially underway on its earliest date yet after a scorching summer that has many other farmers groaning but — so far — is promising to be good for vintners. 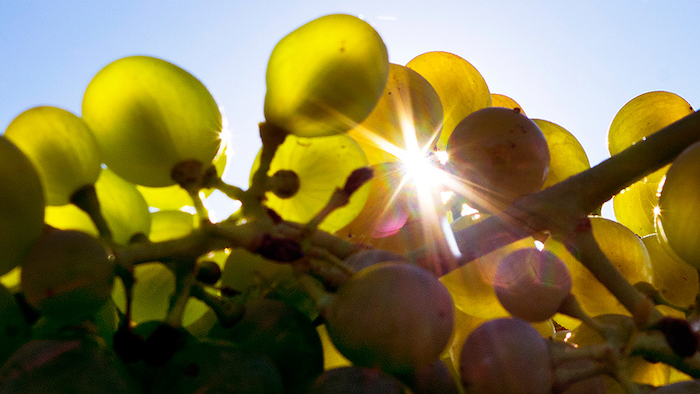 LOERZWEILER, Germany (AP) — Germany's grape harvest is officially underway on its earliest date yet after a scorching summer that has many other farmers groaning but — so far — is promising to be good for vintners.

At a vineyard in Loerzweiler, south of Mainz in southwestern Germany near the Rhine River, workers started plucking white grapes off rows of vines on Monday.

The first grapes go to make Federweisser, a young wine that gives the first clues about the potential quality of a vintage. The main harvest is expected to start in late August or early September.

According to the German Wine Institute, it's the earliest start yet to the country's grape harvest. The previous record was Aug. 8, in 2007, 2011 and 2014. Last year, the grapes stayed on the vine until Aug. 16.

"I grew up at a winery around here. I am 52 years old and in these 52 years I have never seen us harvest the first grapes around the first weekend in August," winegrower Mathias Wolf said.

He's hopeful that this won't just be an early year but a good one for wine. But even the sun-loving vines could use at least some rain soon.

"At the moment it's very good — the quality looks like it will be good, though the next few weeks will be really decisive, whether we get rain or no rain," he said. "But the conditions are there for a good vintage."

German Wine Institute spokesman Ernst Buescher said, with the sunny weather, "we have very healthy grapes, which is very positive for the quality of the wine, but we need some rain."

He said without rain soon the leaves could wither and hurt the quality of the wine.

Many other German farmers would be glad to have such concerns. The national farmers' association has said it expects the grain harvest to come in millions of tons short of initial expectations after a spring and summer of blue skies and barely any rain in large swathes of the country.

It has called for 1 billion euros ($1.15 billion) in emergency aid for farmers. In addition to the damage to crops, livestock farmers are also facing shortages of feed.

Agriculture Minister Julia Kloeckner, while stressing that she is "very concerned" about the effects of the drought on farmers, says the federal government wants to see a full report on the harvest in late August before committing any money. In Germany, state governments are primarily responsible for such aid.

Kloeckner said last week "the current heat wave is endangering the harvest," but noted that conditions vary widely among regions.

The German Wine Institute's Buescher sees a rosy future for the industry in one of Europe's more northerly winegrowing regions.

"The future of German wine is really good because, due to the weather changes, the quality of the wines — and especially even the red wines — is getting better and better," he said.