In comments at odds with his home state's whiskey distillers, Kentucky's Republican governor is downplaying fears that the European Union's retaliatory tariffs could disrupt the booming market for the Bluegrass state's iconic bourbon industry. 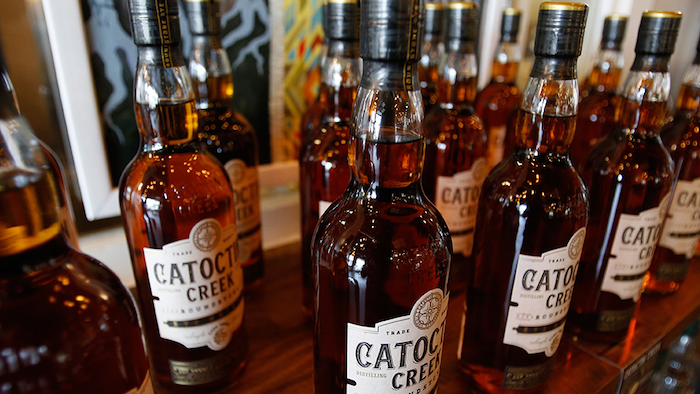 "There's always the potential for some type of impact, but I don't think it will be a tremendous impact," Gov. Matt Bevin said when asked about tariffs during a TV interview this week with Bloomberg.

Bevin, a regular at bourbon industry events celebrating new or expanded facilities, called the tariffs that took effect Friday a "money grab" by the EU, but sounded confident that Kentucky bourbon will expand its share of the vast European whiskey market.

"Europeans are still going to drink more bourbon this year than they did last year; they're just going to pay more for it because their government is going to take some of it," he said this week during an interview on CNBC's "Squawk Box."

Bevin referred to Europe as a "small portion" of the bourbon market, but the Kentucky Distillers' Association said EU countries accounted for nearly $200 million of the more than $450 million in total exports of Kentucky bourbon and other distilled spirits in 2017.

The governor's comments downplaying the effect of tariffs stood in stark contrast to the distillers' group, which warned that duties on American whiskey would have a "significant impact" on investment and employment in the state's $8.5 billion bourbon sector.

"As we have said for the past few months, there are no winners in a trade war, only casualties and consequences," the Kentucky Distillers' Association said in its statement, which was released shortly after Bevin's comments but did not directly refer to the governor.

Tariffs will drive up the price of Kentucky whiskey in EU markets where customers have plenty of spirits to choose from.

Kentucky's auto parts sector could be hit hard, since many of its products are shipped to auto assembly plants in Canada and Mexico, he said Friday. Many of those vehicles are sent to the U.S. for sale. "Kentucky is a big, big player in that," Troske said.

As for the bourbon sector, he said: "I don't think tariffs are going to slow the growth down that much."

Kentucky produces about 95 percent of the world's bourbon, with such brands as Jim Beam, Evan Williams, Wild Turkey, Maker's Mark, Woodford Reserve and Four Roses. The industry supplies about 17,500 Kentucky jobs, according to the Kentucky Distillers' Association.

The industry is in the midst of a building boom, with more than $1.1 billion in projects planned, underway or completed in the past five years, it said. The construction includes expanded production facilities and new tourism centers.

Bevin, who routinely lavishes praise on Trump, said this week that the back-and-forth trade actions reflect "a certain amount of posturing that's going on. It's part of the negotiation process." The governor said the EU has more to lose in a trade dispute.

"If they want to play this game with the United States, ultimately they're going to lose," he said during the Bloomberg interview. "So I don't see that this will have long-term implications on trade between the EU and the U.S. I really don't, but especially as it relates to bourbon. People in Europe still love bourbon, they're still going to buy it and the European Union will just make money off it."

Bevin's downplaying of tariffs ran counter to comments by Senate Majority Leader Mitch McConnell, a Kentucky Republican who said during a recent speech in Louisville that tariffs "will not be good for the economy" and expressed hope that "we pull back from the brink."

American spirits makers are being targeted for duties in other trade disputes. Mexico imposed tariffs on U.S. whiskey in response to Trump administration duties on Mexican steel and aluminum, while other countries including China and Canada are taking aim at American spirits.

Wall Street has been closely monitoring threats of a trade war. Vivien Azer, an analyst at Cowen & Co., said in a recent note that tariffs could affect a "notable piece" of international sales for Kentucky-based Brown-Forman Corp. The producer of such brands as Jack Daniel's Tennessee Whiskey and Woodford Reserve tried to hedge against tariff-related price increases by stockpiling inventories overseas.

Small and mid-sized distilleries often don't have the financial wherewithal to stockpile supplies. But even for the biggest distillers, stockpiling offers "only a short-term fix, as there's only so much excess inventory" they could ship, Azer said.

But if the trade dispute drags on, "we would generally expect the tariff impact to subside over time as pricing and consumer purchase behavior adjusts," Azer wrote.